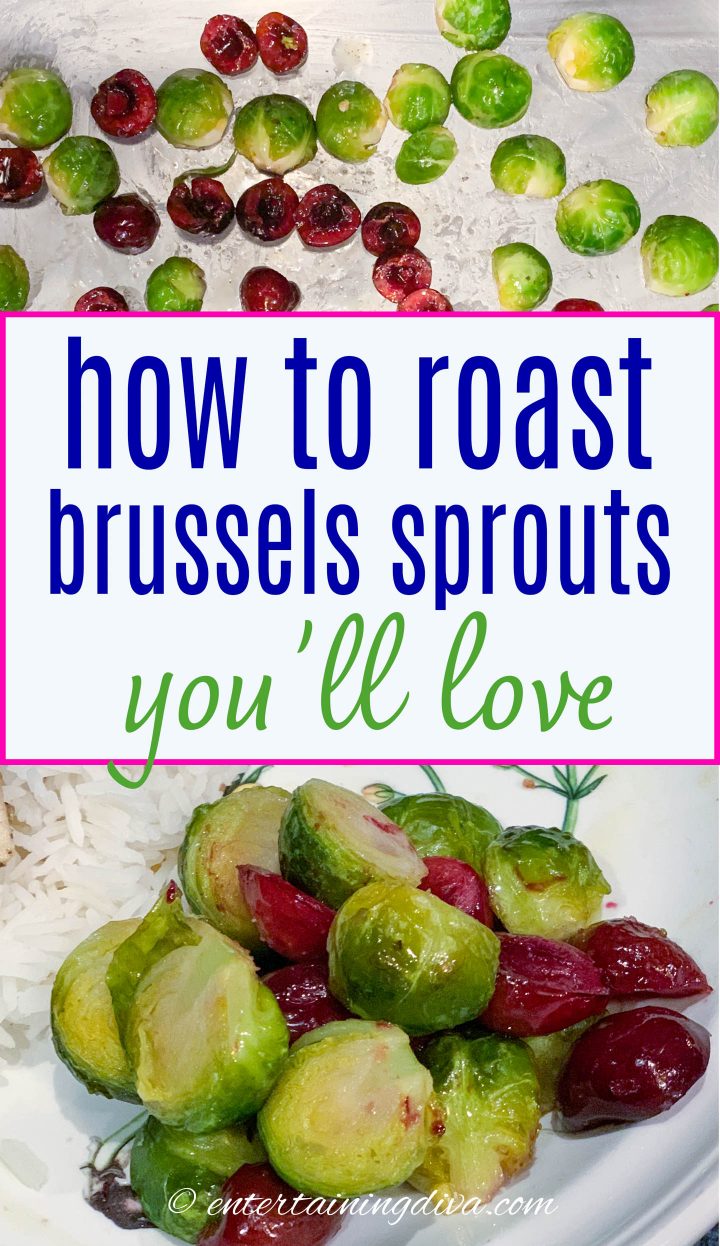 This unique roasted Brussels sprouts recipe uses the sweetness of cherries to offset the bitterness of Brussels sprouts which results in a dish that everyone loves. And it’s pretty enough to use for Christmas dinner.

I have a confession to make…I don’t like Brussels sprouts!

Since that’s the case, you might be wondering why on earth I’m posting this recipe.

Well…I should probably revise that…I didn’t like Brussels sprouts until I tried this recipe!

However, when I first heard the idea of mixing in some cherries, I had my doubts. It’s a pretty unique Brussels sprouts recipe.

But now that I’ve tried it, I have to say…the combination is genius!

The sweetness of the cherries is the perfect way to offset the bitterness of the Brussels sprouts.

I think it’s the absolute best way to make them.

It’s also a great side dish for Christmas dinner. The red and green colors are a festive addition to your holiday menu.

How To Make Roasted Brussels Sprouts With Cherries

Cut the stems off the Brussels sprouts at the base of the leaves.

Remove the outer layer of leaves which can be tough and bitter.

Then cut the sprouts in half lengthwise.

Remove the pits from 1 cup of cherries. Using a cherry pitter (like this one*) makes this job much easier.

Then cut them in half.

Combine the cherries and trimmed Brussels sprouts in a bowl.

Mix until the cherries and Brussels sprouts are evenly coated with oil.

Grease a cookie sheet with the remaining 1 Tablespoon of olive oil.

Lay out the Brussels sprouts and cherries in a single layer. Do not stack them or you will miss out on a lot of the flavor and crispiness.

Make sure that all of the Brussel sprouts have the cut side facing down. This edge will carmelize when the olive oil gets hot which adds a lot of flavor to the vegetables.

How To Make Frozen Brussels Sprouts

If you don’t have fresh Brussels sprouts, frozen ones will work, too.

Thaw them just enough to make them easy to cut.

I usually do this in the microwave for about a minute on the defrost setting (but the time will vary depending on your microwave).

You could also take them out of the freezer early and let them sit at room temperature for a few minutes.

Then make the recipe the same way as you would for fresh Brussels sprouts, adding an extra 5 minutes to the cooking time.

Wanda Simone
Adding cherries to Brussels sprouts may sound like an odd combination, but it actually works really well. The sweetness from the fruit helps to balance out the bitterness of the Brussels sprouts to make a side dish that everyone loves.
5 from 1 vote
Print Recipe Pin Recipe
Prep Time 15 mins
Cook Time 20 mins
Total Time 35 mins
Course Side Dish
Cuisine American
Servings 8 servings
Prevent your screen from going dark