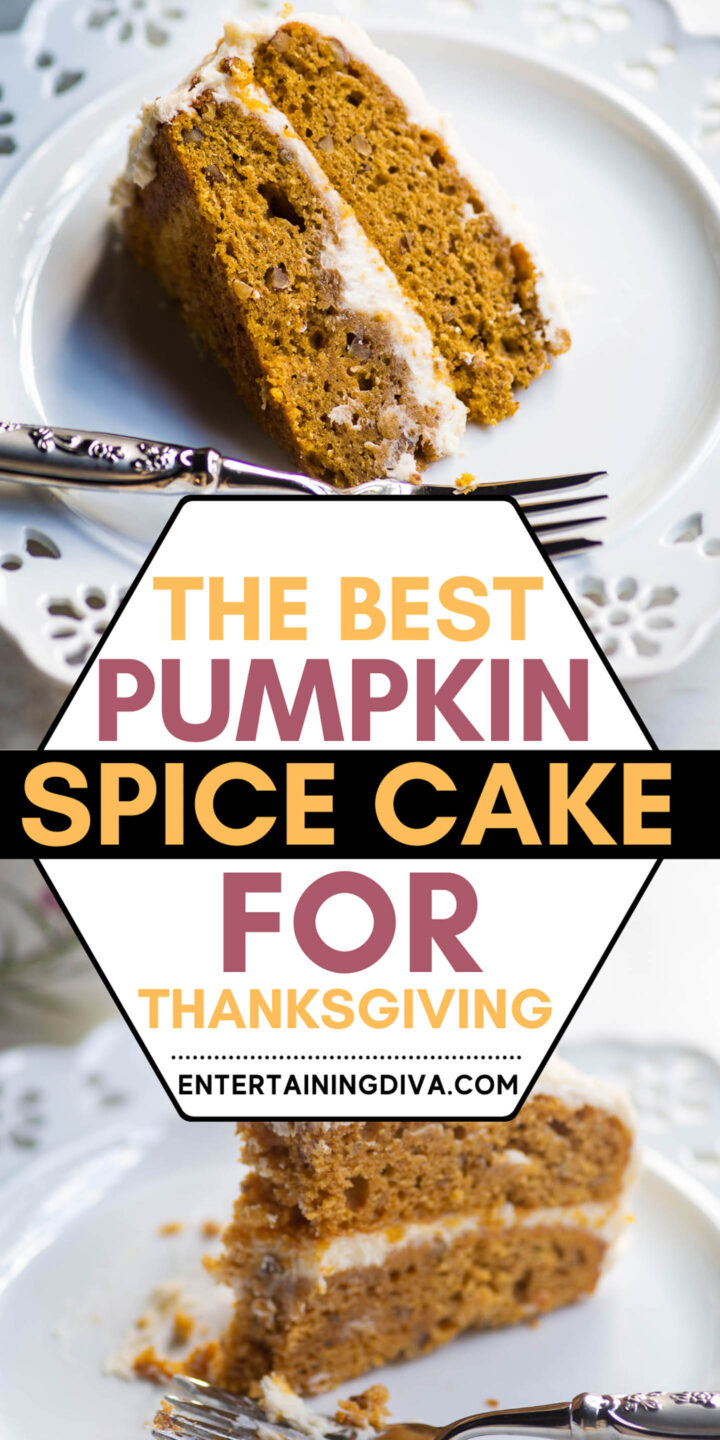 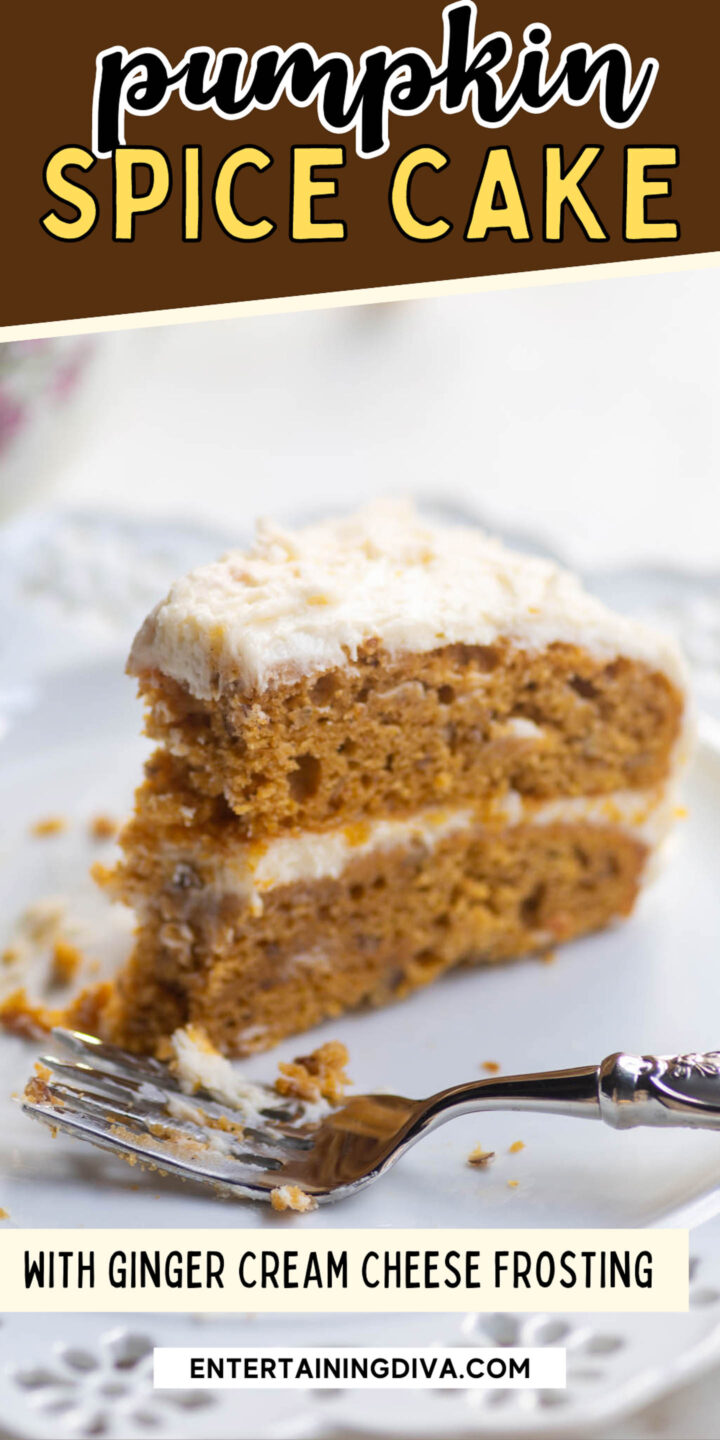 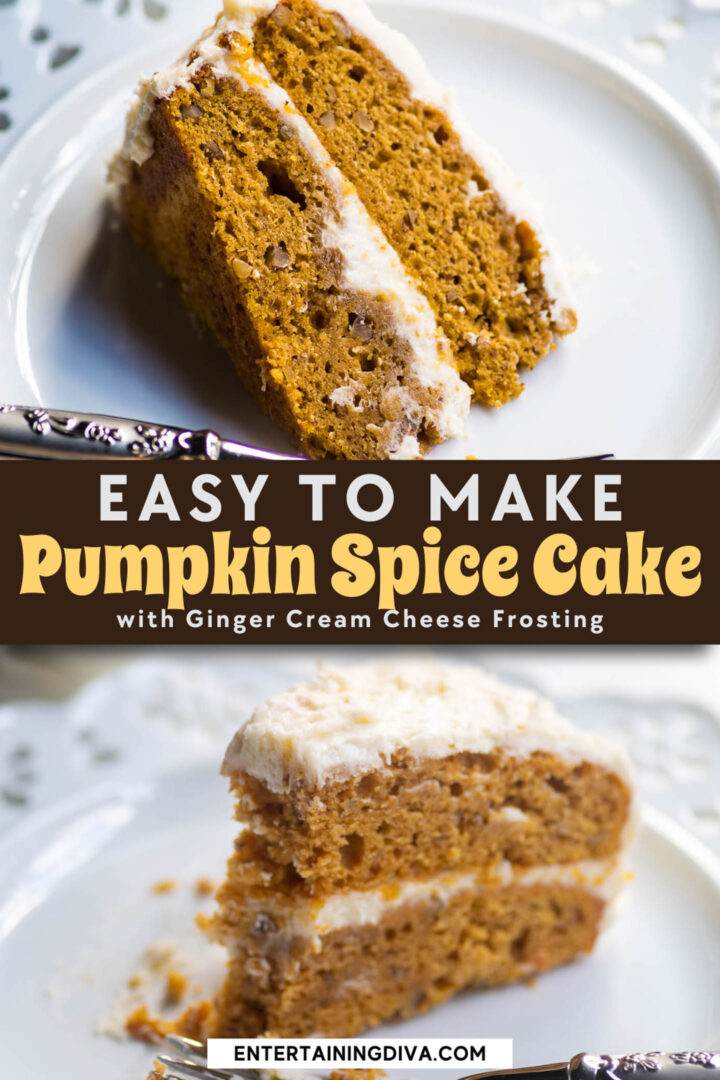 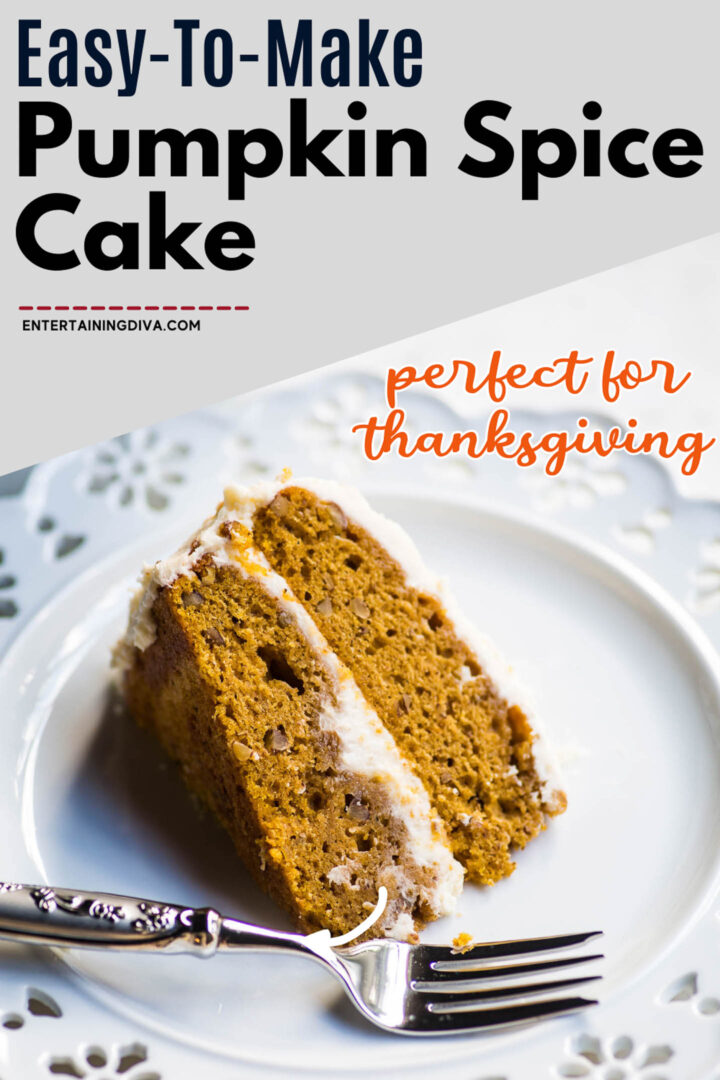 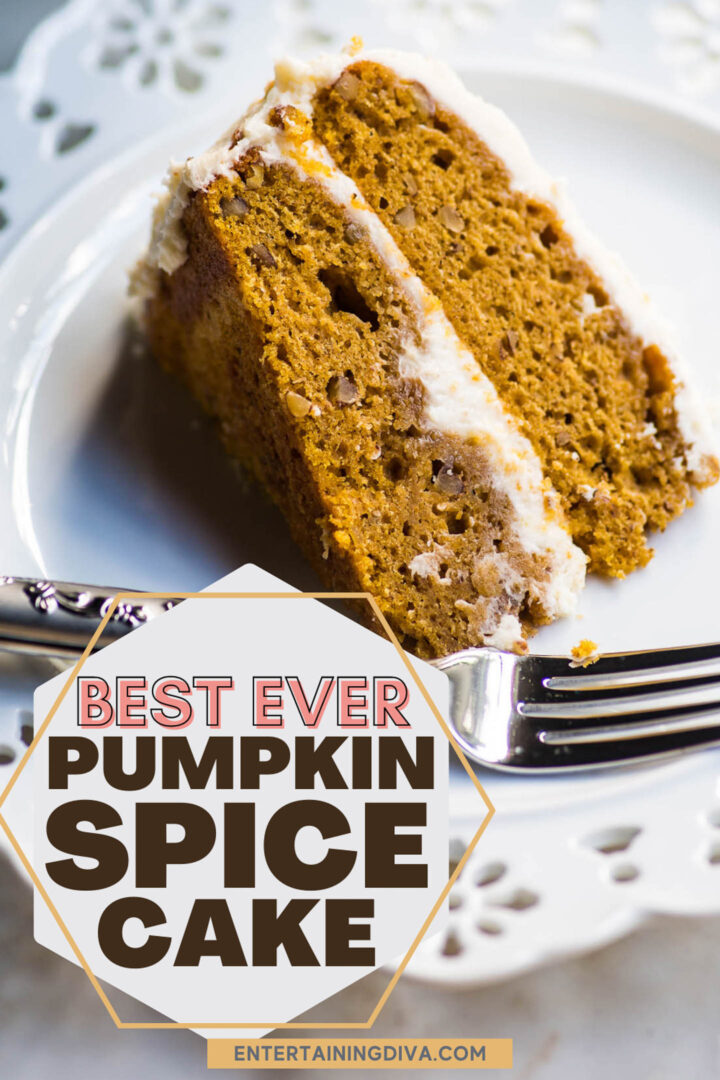 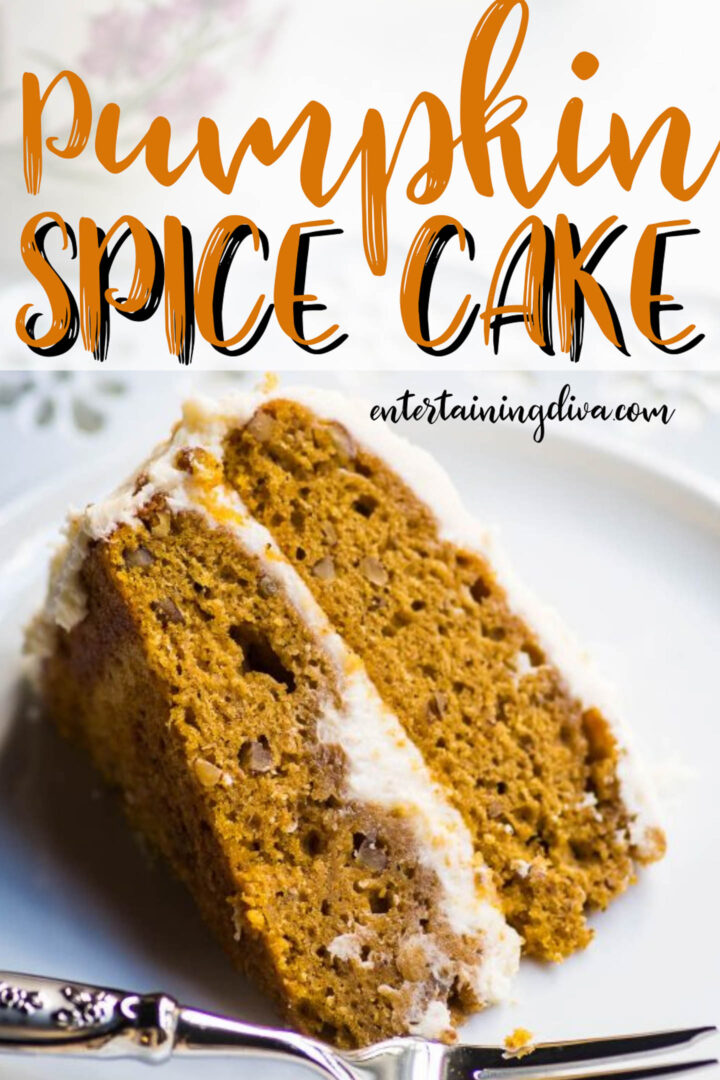 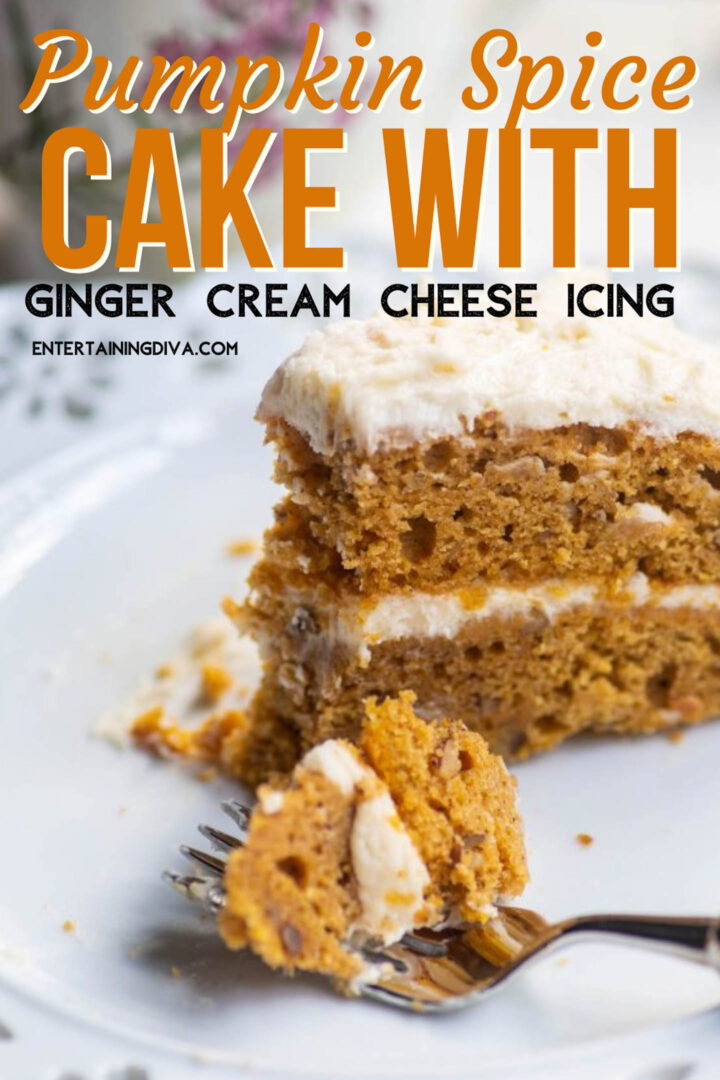 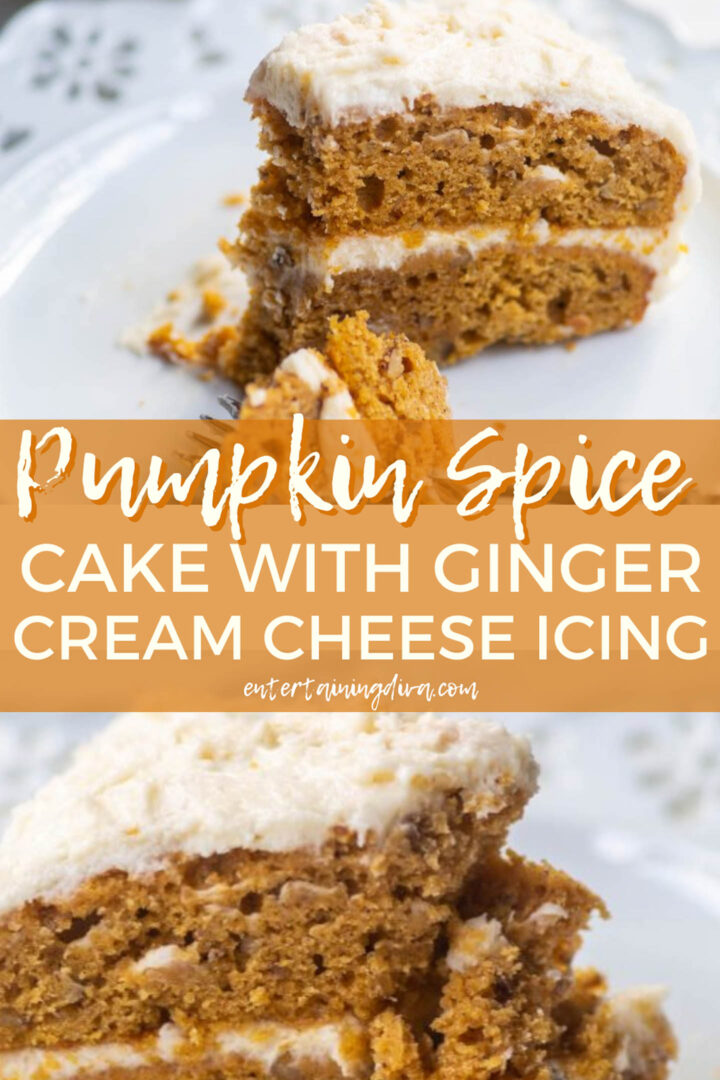 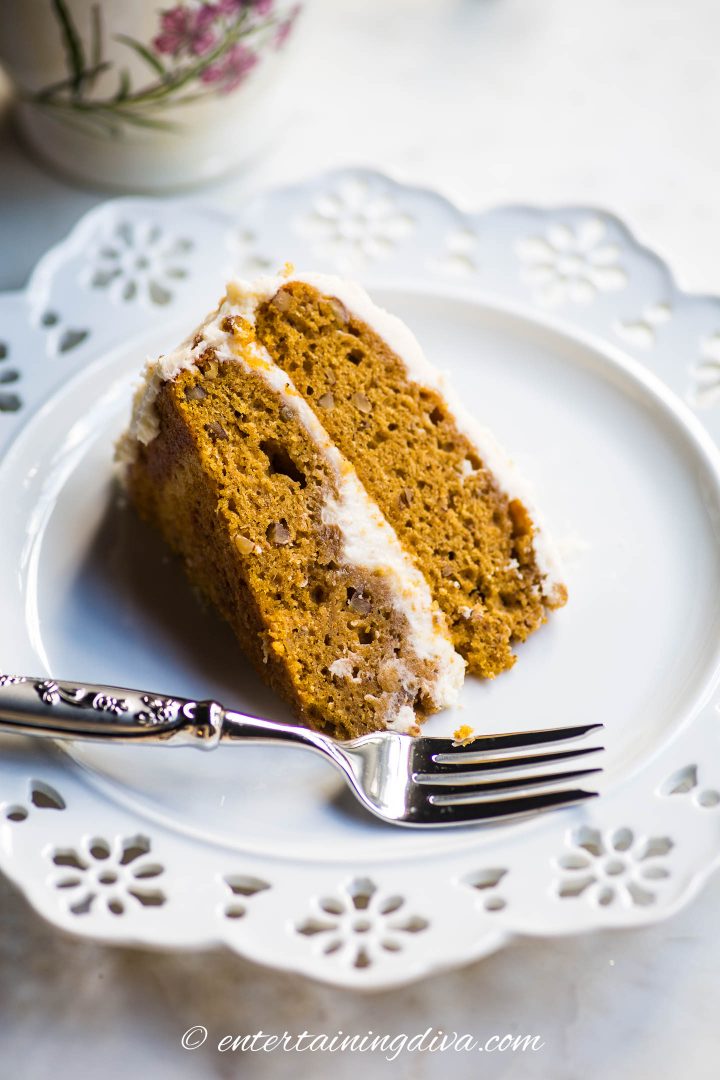 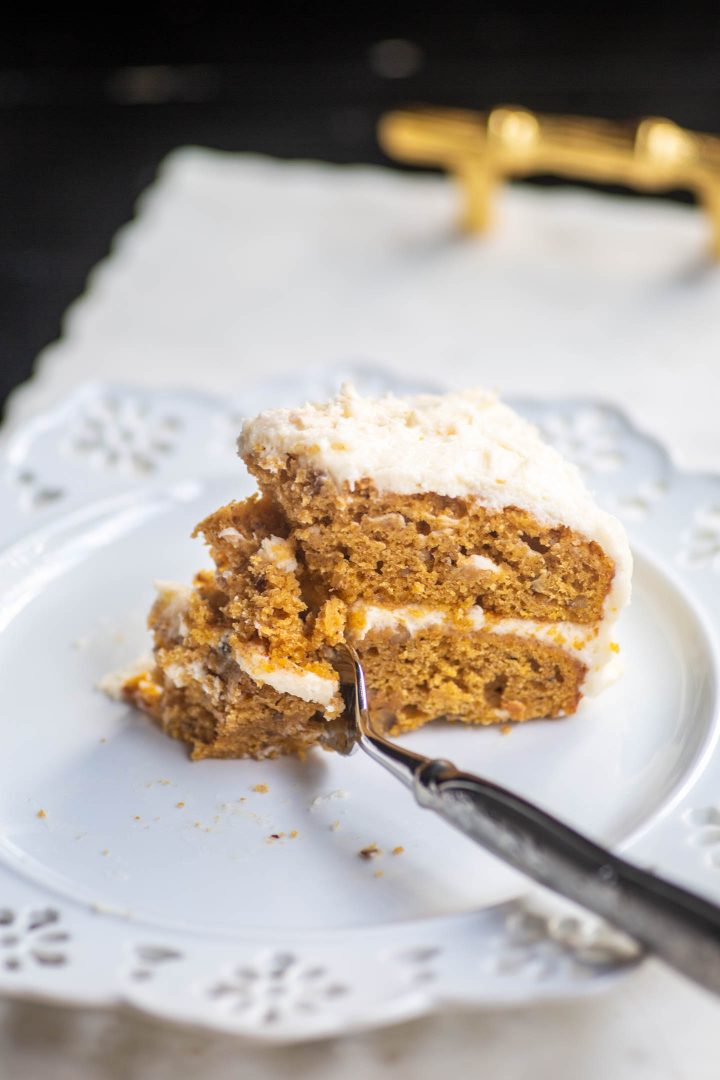 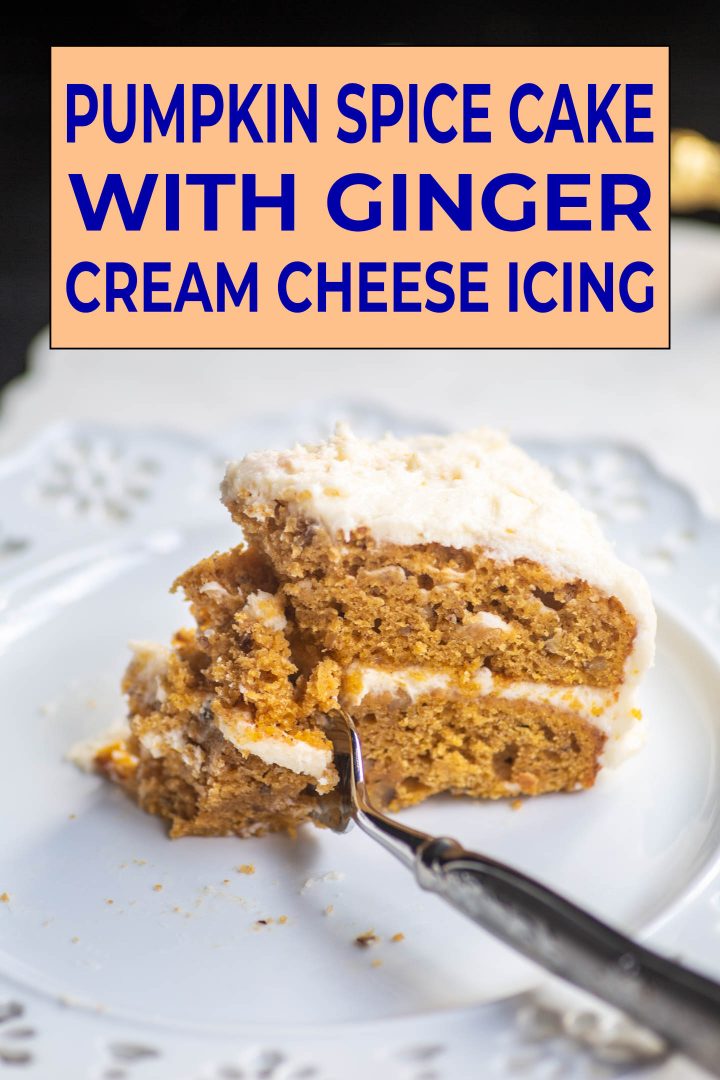 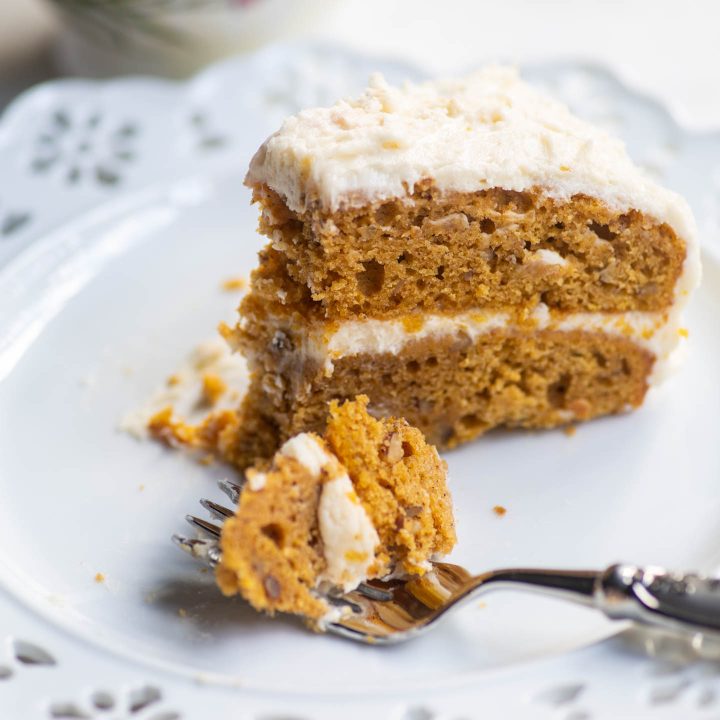 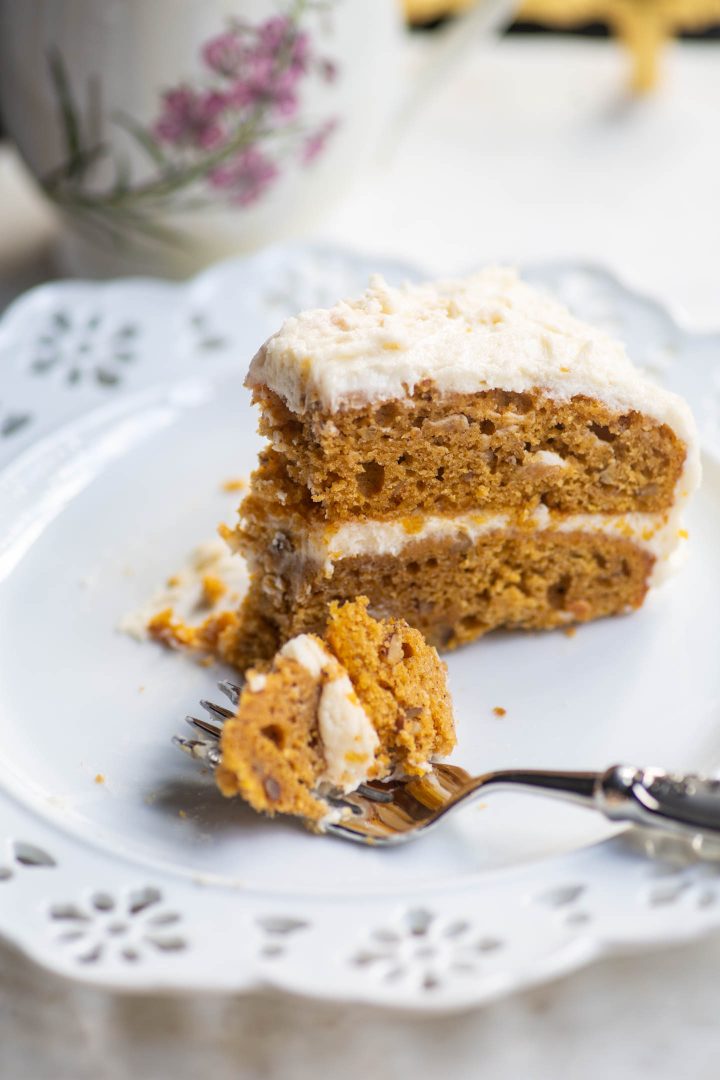 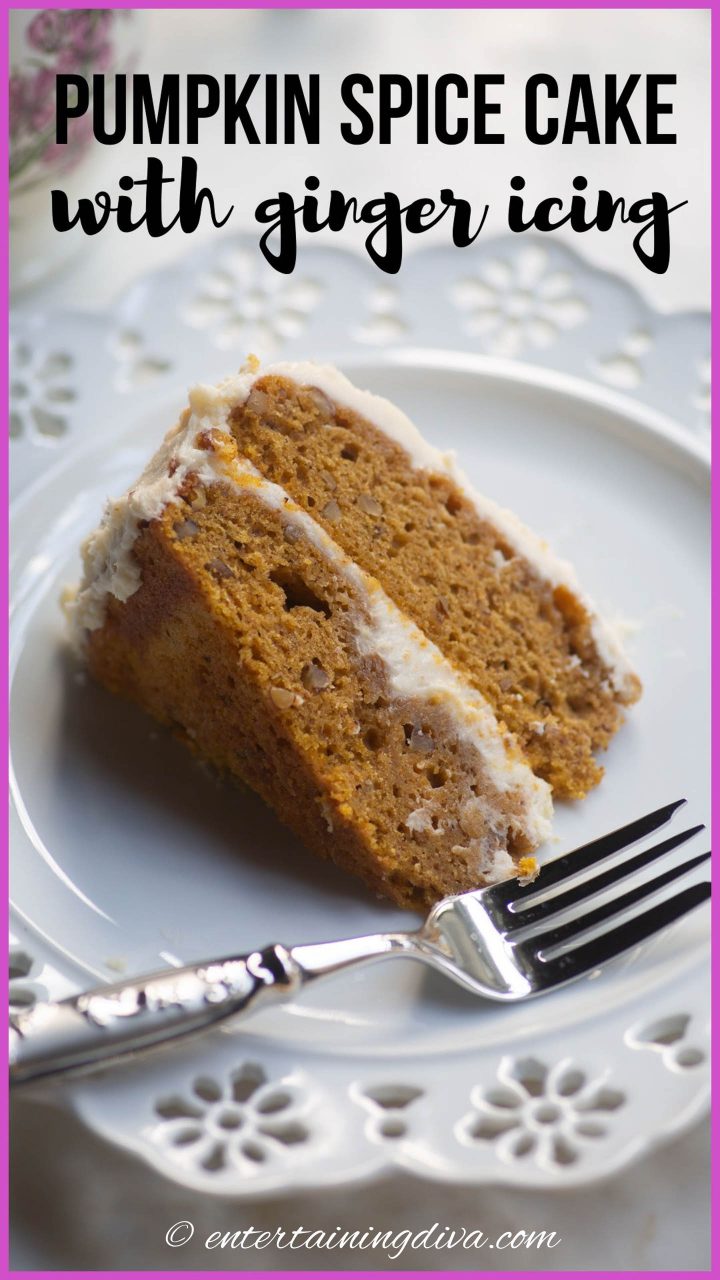 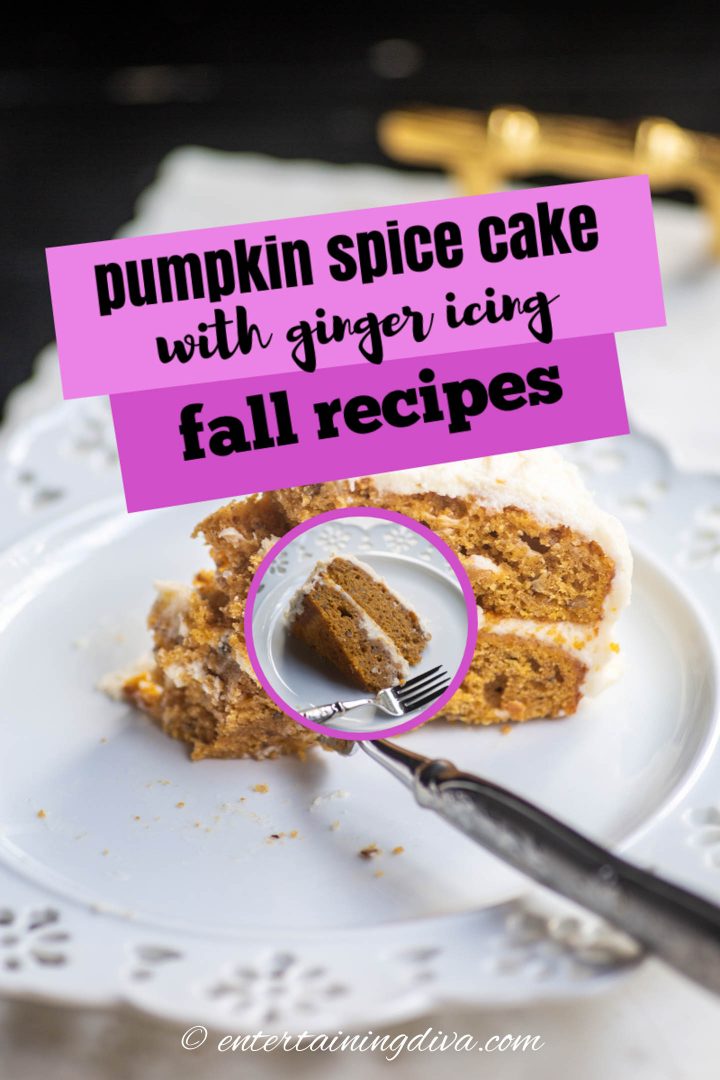 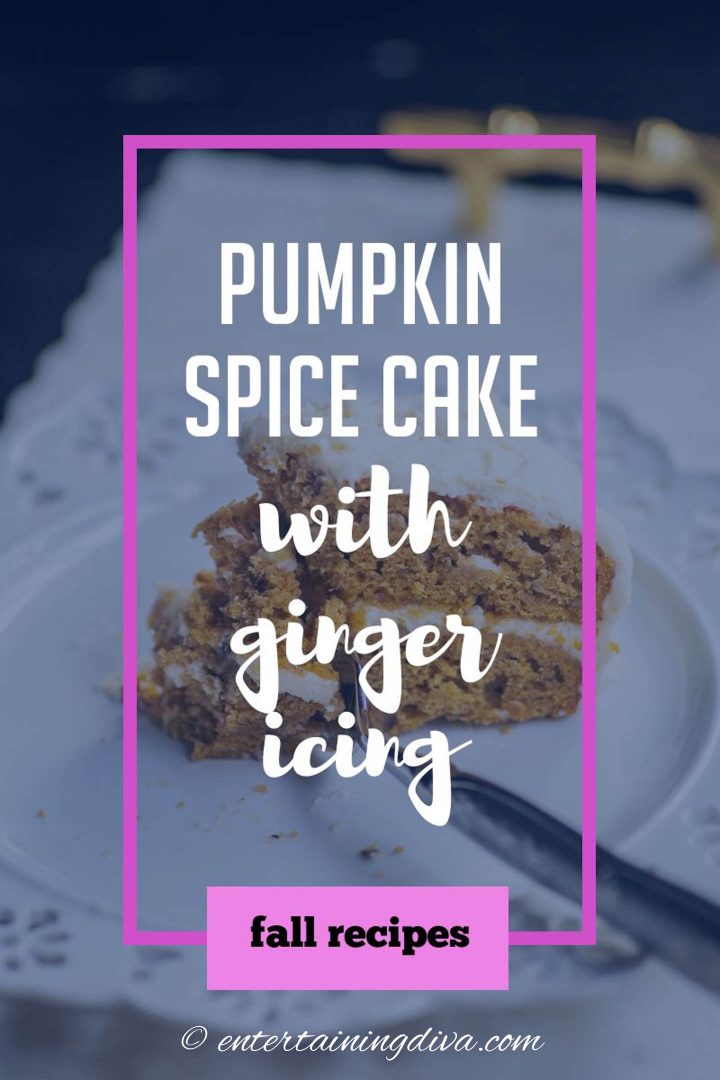 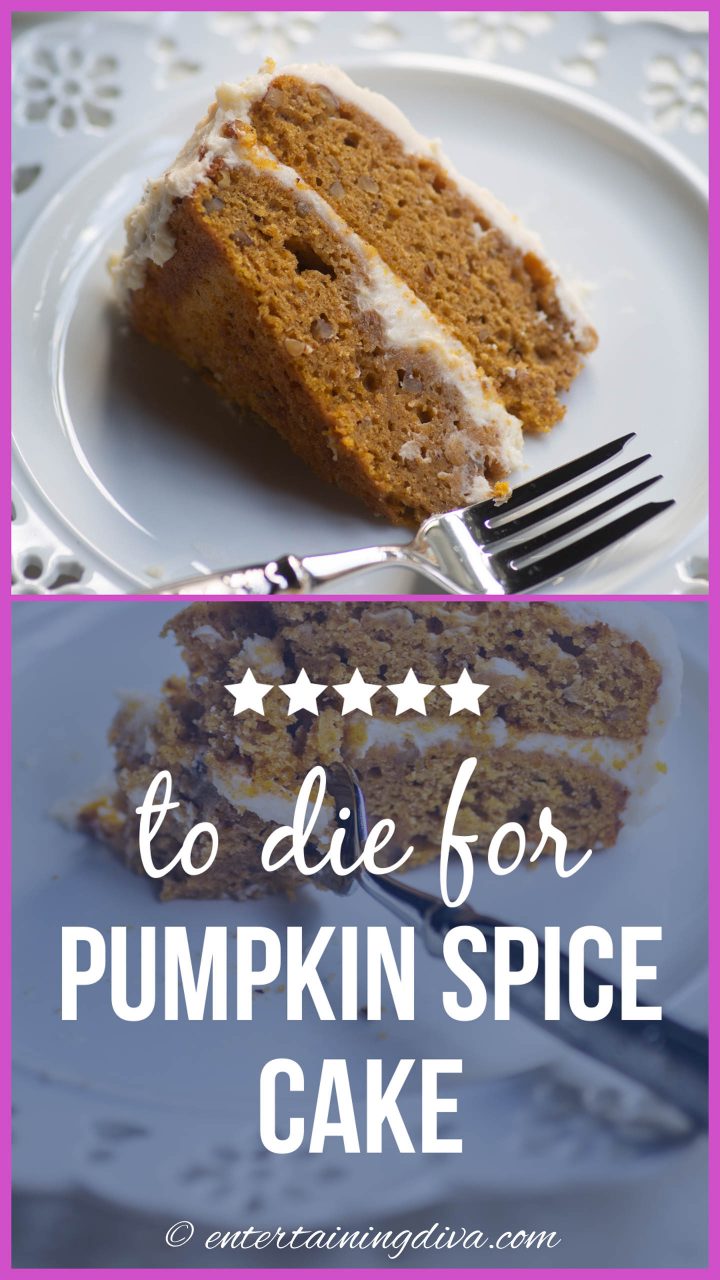 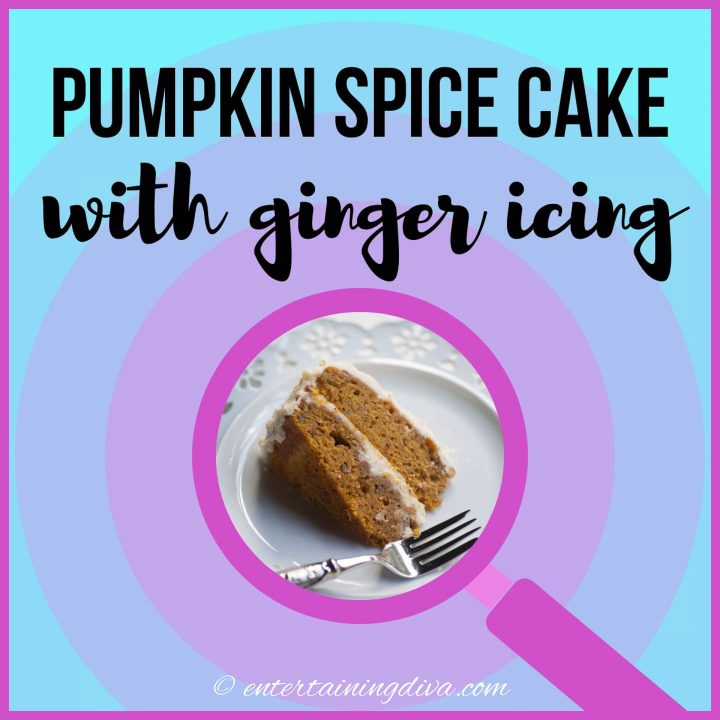 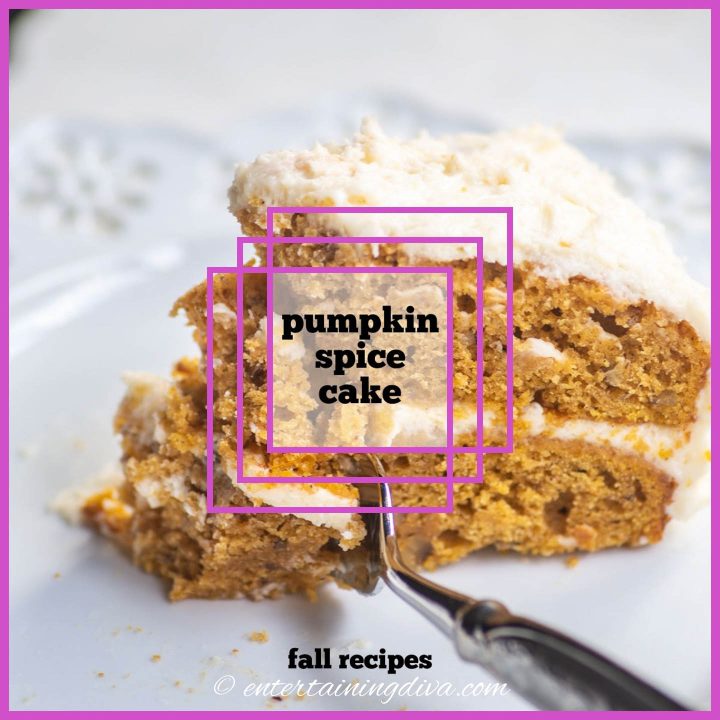 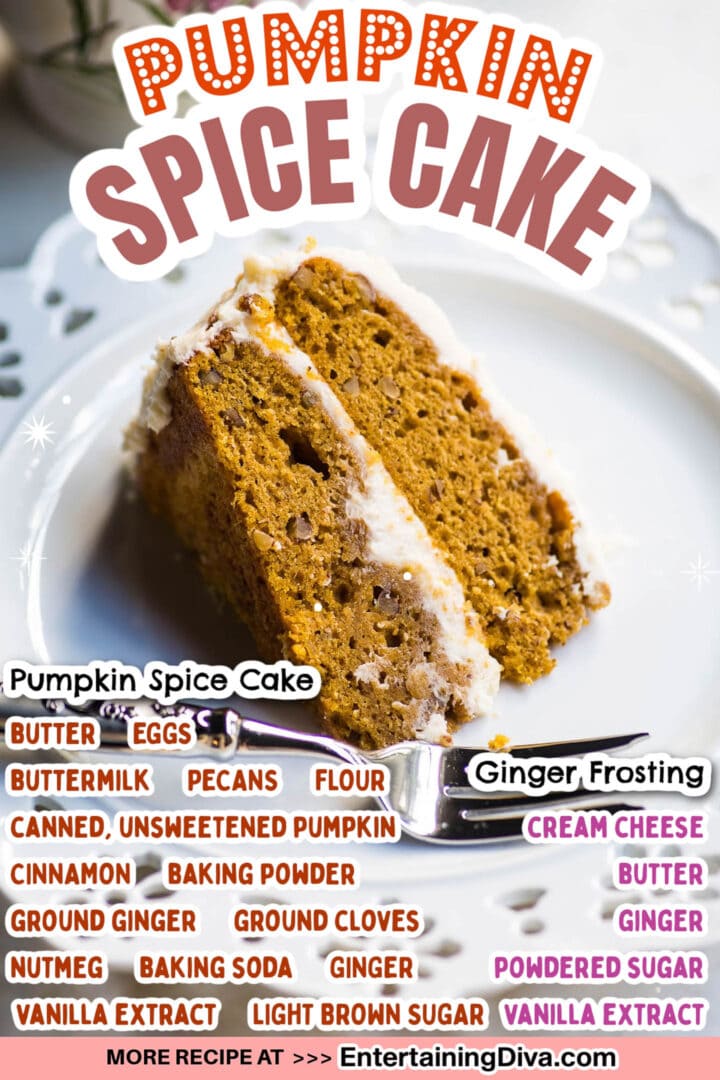 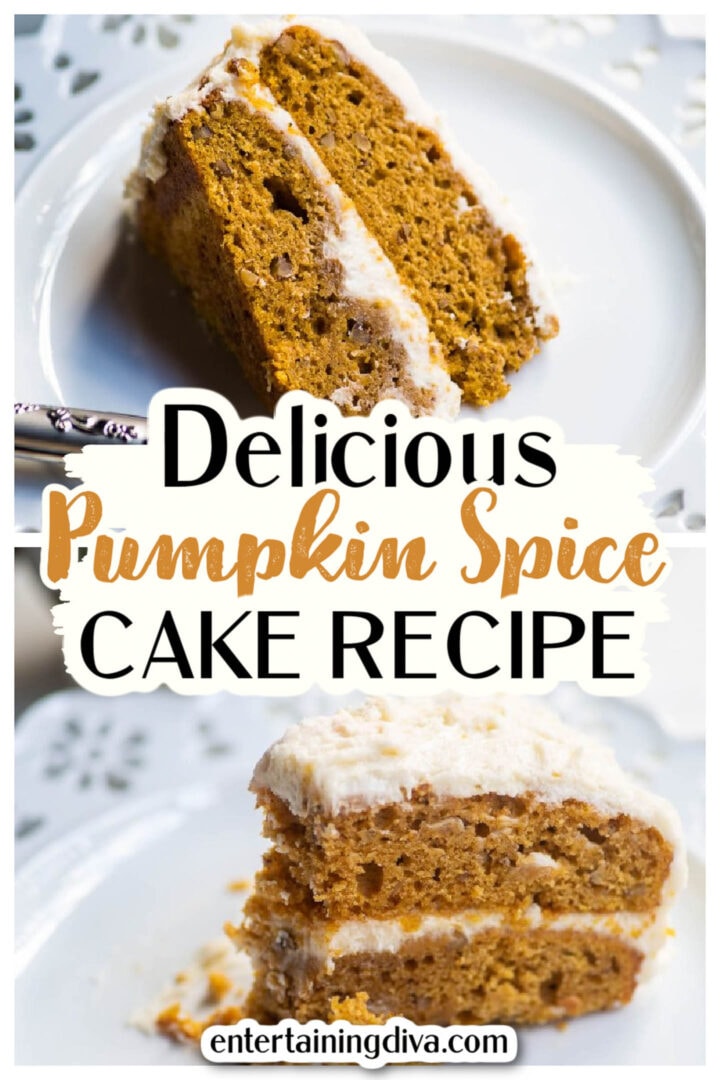 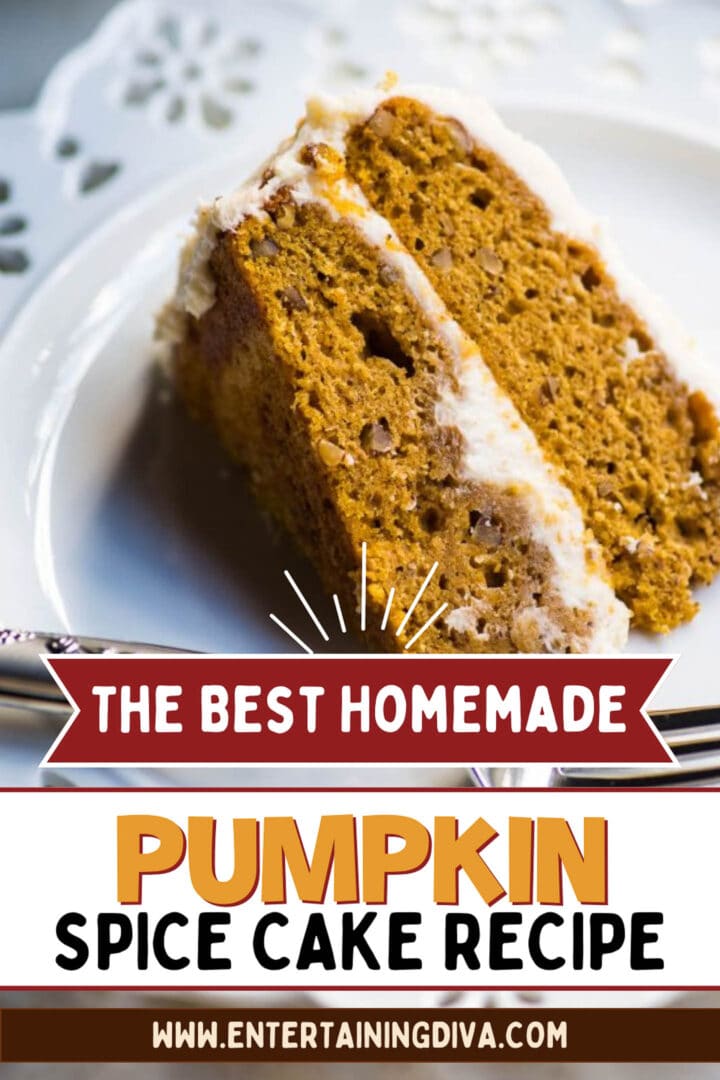 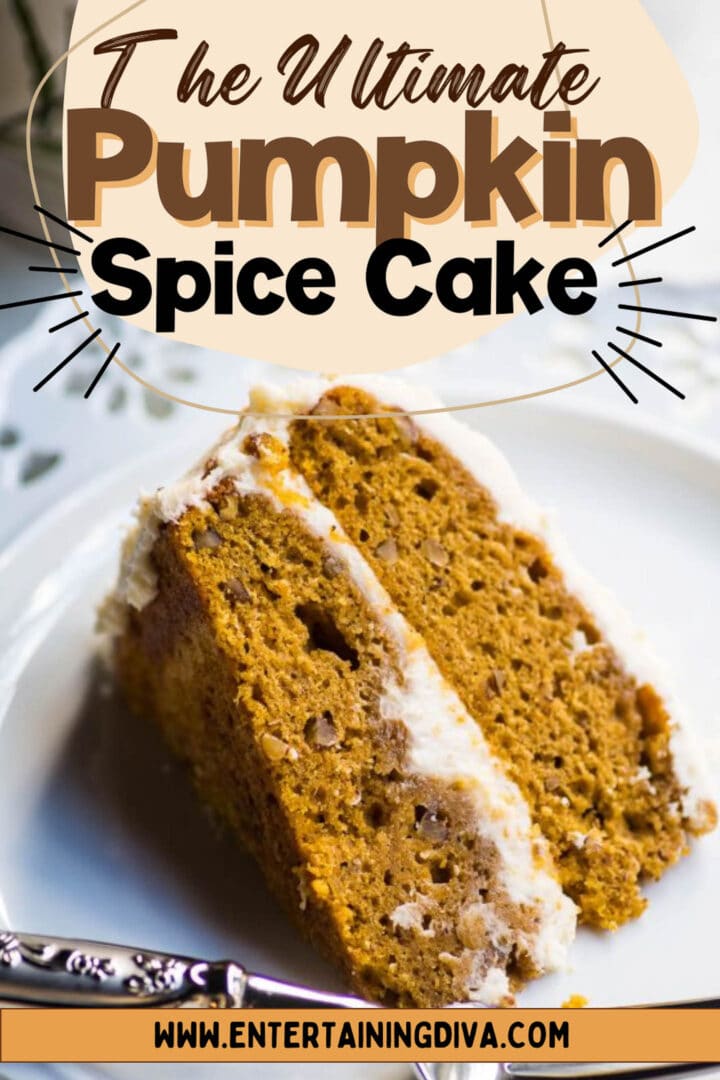 This pumpkin spice cake recipe with ginger cream cheese icing is hands down my favorite Thanksgiving dessert recipe. It’s made from scratch but it’s easy to do, and it’s soooo delicious! Much better than pumpkin pie if you ask me. But then I’m not much of a pumpkin lover, which is why it’s even more surprising that I love this cake.

This from scratch pumpkin spice cake with ginger cream cheese icing is my absolute favorite fall dessert recipe, EVER.

And I have to admit, I don’t even like pumpkin that much.

But this recipe is delicious!

It’s kind of like carrot cake (which I love), only with pumpkin. And adding ginger to the cream cheese icing makes it even better.

Now that I’ve made it (my version was inspired by the pumpkin layer cake recipe in the 2006 Christmas with Southern Living cookbook*), it has become my go-to Thanksgiving dessert recipe every year.

Actually, I’ve even been making it for Christmas dinner, too. Quite surprising for a gal who doesn’t like pumpkin 🙂

Even better? This pumpkin spice cake is moist, easy to make and relatively healthy. Especially if you leave off the frosting…not that I’ve ever actually done that 🙂

And who doesn’t love the smell of pumpkin and cinnamon wafting through their house?

As an added bonus, you can make it the day before. Which means it’s not taking up space in your oven while you’re trying to get everything else ready for Thanksgiving dinner.

Then all you have to do to serve it, is pull it out of the refrigerator and start cutting slices.

Here’s your shopping list for the cake and icing:

Before you start, set the butter and cream cheese out on the counter for an hour or two to soften. This will make mixing them much easier.

If you forget to do this and need to start right away, you can also put them in the microwave. Use Low power for about 30 seconds, depending on how strong your microwave is.

You don’t want it melted. You just want it to be soft so it’s easy to mix.

To keep the cake from sticking to the pan, line the bottom of it with parchment paper.

If you don’t have parchment paper, you can grease it by spreading a thin layer of butter or shortening on the bottom of the pan.

How To Make The Pumpkin Spice Cake

Beat 1 stick of softened butter with 1 1/2 cups brown sugar in your electric mixer on medium speed until it’s fluffy, about two to three minutes.

The butter and sugar mixture should be a light yellow color (but not white) when it is finished mixing. This helps to create a lighter cake texture.

Then add 2 eggs one at a time, and beat each on after you add it.

Next, beat in 1 cup of the canned, unsweetened pumpkin. Put this mixture to the side.

Take out another mixing bowl.

Mix with a spoon until combined. Put this mixture to the side.

In another small mixing bowl, combine 1/2 cup buttermilk, 2 teaspoons vanilla extract and the grated ginger together with a spoon.

Now we’re going to put them all together by alternating between adding the flour mixture and the buttermilk mixture to the bowl that has the butter and the sugar.

Start by adding about a third of the flour mixture to the butter mixture and beat on low speed until it’s combined. You don’t want to beat too much, just until the flour is mixed in. Otherwise the cake will turn out tough.

Then add about half of the buttermilk mixture into the bowl with the butter and sugar. Beat on low speed until it’s combined. Again, you don’t want to mix it too much.

Repeat with another third of the flour and the rest of the buttermilk mixture.

Finally mix in the last third of the flour mixture.

If you’re using pecans or walnuts, stir 1 cup of them into the cake batter with a spoon. Don’t use an electric mixer for this part. The more you mix the flour, the tougher the cake gets.

Put the pans on wire racks to cool for about 10 minutes.

Then cut around the edge of the cake to loosen it from the sides of the pan.

Turn the cake pans upside down to remove the cake and place them on the wire racks to cool completely.

While the cake is cooling, make the cream cheese icing.

Grate another piece of fresh ginger, about 1 1/2 inches long. You’ll need about 1 Tablespoon of grated ginger.

Then in your electric mixer, beat 1 1/2 packages of softened cream cheese, 1 stick (1/2 cup) softened butter and the ginger together.

While you’ve got the electric mixer running, gradually add 4 cups powdered sugar into the cream cheese.

When it’s all mixed in and smooth, add in the vanilla.

Before you start frosting the cake, make sure it is completely cool or the cream cheese icing will melt.

If you are icing a layer cake, cooling the cream cheese icing is also a good idea. It will stiffen a bit which makes it stick to the side of the cake better. To do this, cover the bowl and put it in the refrigerator for 20 or 30 minutes.

Then spread the icing over the cake with a knife or spatula.

Finally, cover the cake and put it in the refrigerator until you are ready to serve.

The cake can be stored in the refrigerator for up to 2 days.

How do you make gluten-free pumpkin spice cake?

Simply replace the all-purpose flour with measure-for-measure gluten-free flour, such as King Arthur’s.

Does cream cheese icing need to be refrigerated?

Yes, the cream cheese will start to melt if it sits at room temperature for too long. 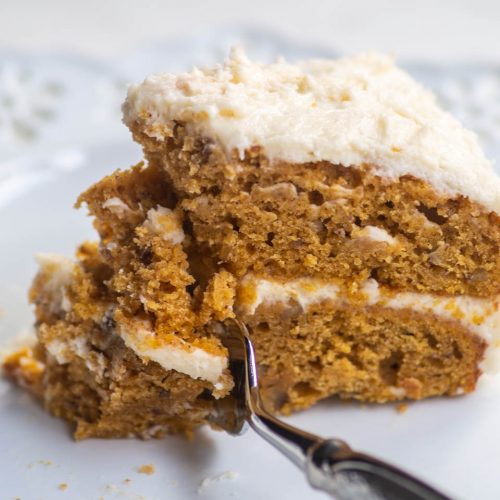 Wanda Simone
This pumpkin spice cake with cream cheese icing is a delicious addition to any fall or Thanksgiving meal. And since you can make it the day before, it doesn't take up any time or oven space on the day of your dinner.
4.29 from 7 votes
Print Recipe Pin Recipe
Prep Time 30 mins
Cook Time 20 mins
Cooling Time 1 hr
Total Time 1 hr 50 mins
Course Dessert
Cuisine American
Servings 16 slices
Prevent your screen from going dark

To Make the Pumpkin Spice Cake

Have comments on our pumpkin spice cake recipe with ginger cream cheese icing? Tell us in the section below. 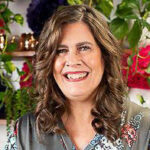