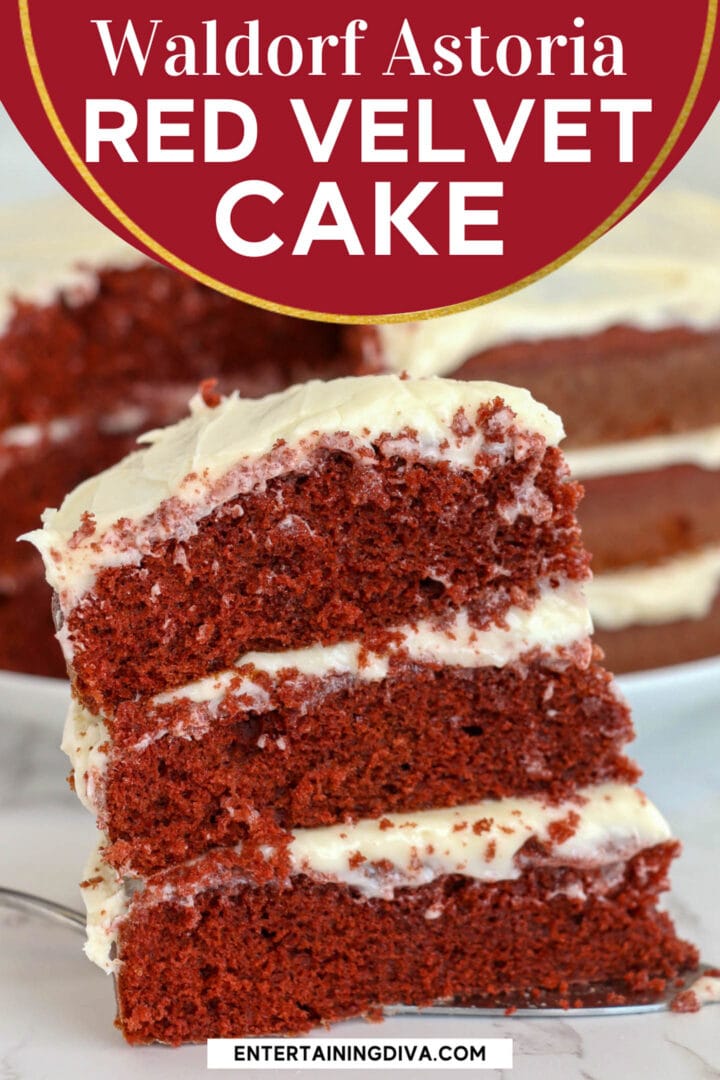 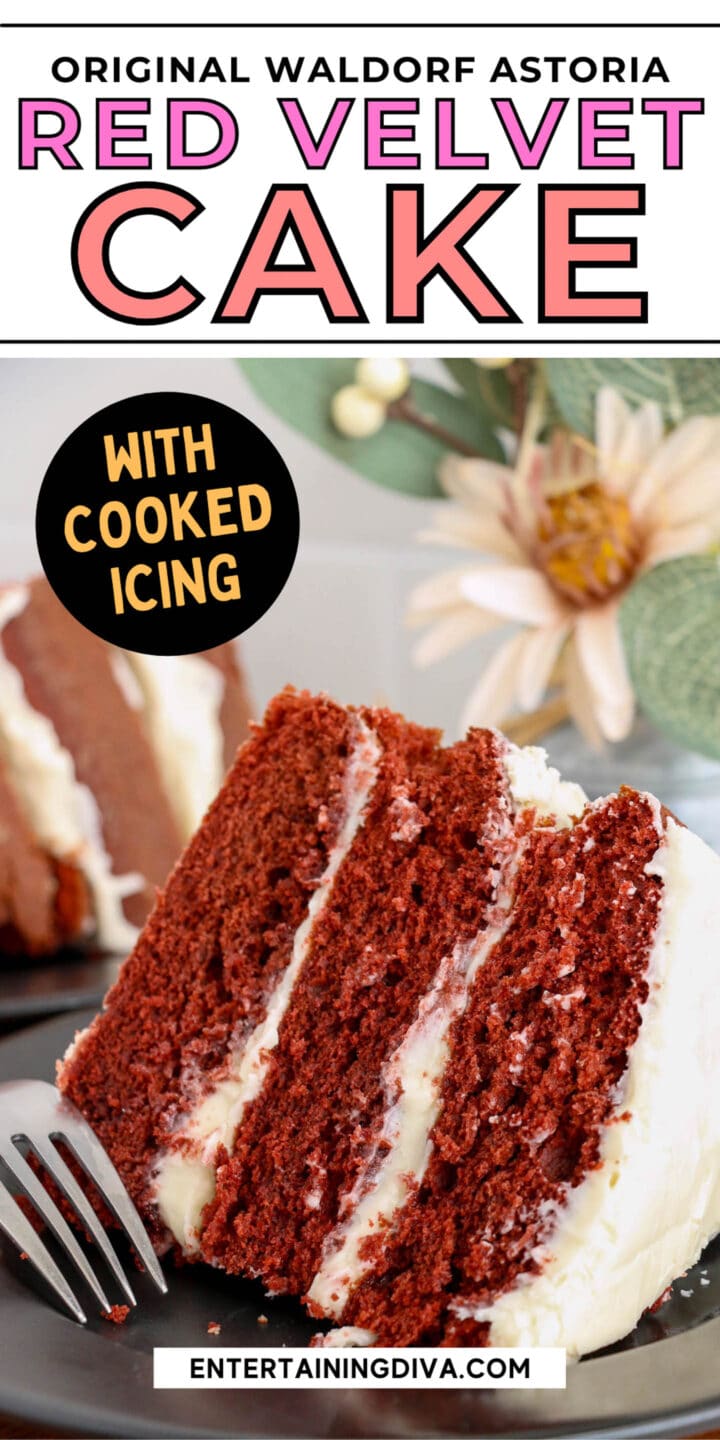 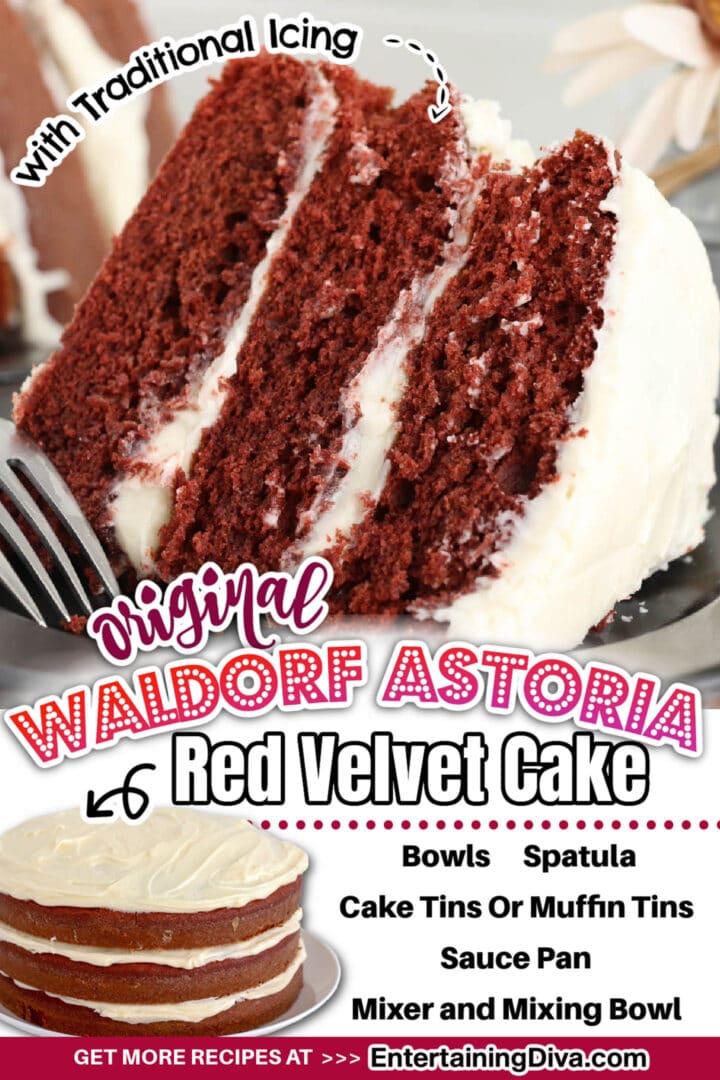 Made with buttermilk and cocoa powder, this original Waldorf Astoria red velvet cake recipe is moist with a hint of chocolate that isn’t too rich. Add on the traditional cooked red velvet cake icing with its whipped cream consistency and you have a dessert that’s to-die-for!

This is the classic red velvet cake recipe from the Waldorf Astoria.

The story goes that the restaurant at the Waldorf Astoria hotel in New York City was the first to serve this cake, back when it first opened in the 1920’s. Although some would argue that it is actually a classic Southern cake recipes.

In either case, it’s one of my absolute favorite cakes!

This red velvet cake has a chocolate flavor but isn’t too rich and uses buttermilk to make sure it is moist.

The original Waldorf Astoria recipe includes an unusual buttercream icing recipe that is so light and fluffy it almost looks (and tastes) like whipped cream.

It’s a little finnicky to make and requires a lot of beating to get it that light and fluffy.

But some people swear it is the only frosting that should ever be used on a red velvet cake.

(However, if you’re a cream cheese icing lover like me, you can serve red velvet cake with this fluffy cream cheese frosting instead. I promise I won’t tell…)

Here’s the ingredients for the traditional icing:

How to make the original red velvet cake

Take the butter, eggs and buttermilk out of the refrigerator a couple of hours in advance. If they are too cold when you mix them, the cake will turn out heavy and dense.

Before you start, adjust the oven rack to the middle position and preheat the oven to 350 ºF.

Grease 2 or 3 8-inch cake pans (or line the bottoms with parchment paper.) For cupcakes, put cupcake liners in the muffin tins.

Add ½ cup of shortening or butter, 1 cup sugar, and 2 eggs to the stand mixer.

Beat until they are light and fluffy (2 to 3 minutes). This is another important step in helping the cake to turn out with the right texture.

The original recipe called for liquid red food coloring. If you are using this:

If you are using gel food coloring:

In another small bowl, mix 2¼ cups of cake flour with ½ teaspoon salt.

To make sure the cake turns out perfectly, it is important to follow the next few steps in order:

Pour the cake batter into the greased cake pans or spoon it into the muffin tins.

Bake for 25 to 30 minutes for a cake, or 20 to 25 minutes for cupcakes until a toothpick inserted in the center of the cake comes out clean.

Mix the flour and milk together in a saucepan, making sure to get rid of any lumps.

In the meantime, beat the butter, vanilla and the confectioners’ sugar together with the mixer until light and fluffy (2 to 3 minutes).

Make sure the flour mixture is completely cooled before continuing to the next step. Otherwise, it will melt the butter and your icing will turn into a soupy mess.

Add the milk and flour mixture into the butter mixture.

Beat it at high speed until it is very fluffy. It should have a whipped cream consistency when it is done. This will take some time!

Note: This icing is very soft so it isn’t appropriate for piping.

Store in an air tight container in the refrigerator for up to 3 days.

Spread the frosting between the cake layers and over the top and sides of the cake.

Or you can make a naked red velvet cake by spreading icing between the layers and on the top, leaving the sides open so you can see the cake.

If you made cupcakes, spread the frosting over the tops of the cupcakes with a knife.

Red velvet cake that has not been frosted can be stored in an air tight container at room temperature for a couple of days.

However, once it has been frosted, it needs to be refrigerated because of the icing.

If I’m making the cake ahead of time, I usually make the cake and frosting and store them separately. Then wait until shortly before the party to put it together.

Yes, red velvet cake is made with cocoa powder so it has a chocolate flavor. But it isn’t as rich as a traditional chocolate cake because of the buttermilk and vinegar.

The frosting on the original Waldorf Astoria red velvet cake was a light and fluffy cooked icing. However, most people today use cream cheese frosting.

Does red velvet cake have to be refrigerated?

If it has not been frosted, red velvet cake does not need to be refrigerated. However, since the icing is made with dairy products, cake that has been frosted should be. 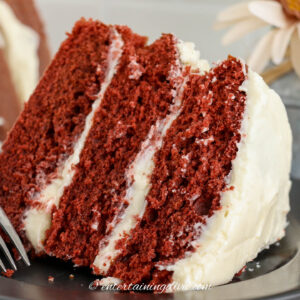 Wanda Simone
This is the original red velvet cake recipe from the Waldorf Astoria. And its traditional icing which some people swear is the only frosting that should ever be used on a red velvet cake.
4.94 from 15 votes
Print Recipe Pin Recipe
Prep Time 30 mins
Cook Time 30 mins
Total Time 1 hr
Course Dessert
Cuisine American
Servings 2 or 3 8″ cake layers / 24 cupcakes
Calories 348 kcal
Prevent your screen from going dark

Have comments or questions about the original red velvet cake recipe?  Tell us in the section below.